You may be wondering which energy plan to choose for your home. You may also be thinking that it would be better for you and the planet to choose a more environmentally responsible way of living, but it is necessary to understand what renewable energy is and how much of it is available and used in the UK.

What is renewable energy?

Renewable energy is energy that come directly from nature (from the sun, wind, water and earth) and whose stocks are inexhaustible. Because a renewable resource produces very little waste and emits very few greenhouse gases (CO2), it is often referred to as clean or green energy.

Below is a list of the most common renewable energies sourced for electricity. This list is not exhaustive and companies are investing heavily in research into new techniques for producing electricity from renewable energy sources.

Solar panels, an assembly of photovoltaic cells (made of semiconductor materials) capture the sun’s energy and transform it, thanks to the action of an inverter, into usable energy.

Wind turbines convert the kinetic energy of the wind into mechanical energy, which is then converted into electrical current through the action of a generator.

The movement generated by the water (force from waterfalls, sea currents, etc.) turns the turbines of hydroelectric power stations, which then produce electricity.

At sea, marine thermal energy (resulting from the thermal shock between the cold waters of the depths and the warm waters of the surface) and the movement of the waves also make it possible to produce energy.

Biogas (used for the production of heat, electricity and biofuels) is obtained from the combustion of organic plant matter in biomass power plants.

The electricity consumption in the UK

The two graphs show the distribution of electricity production over the last few years according to the production techniques and energies used. This will give an idea on the importance of using renewable energies to produce electricity and the leeway for the future of producing energy in general. 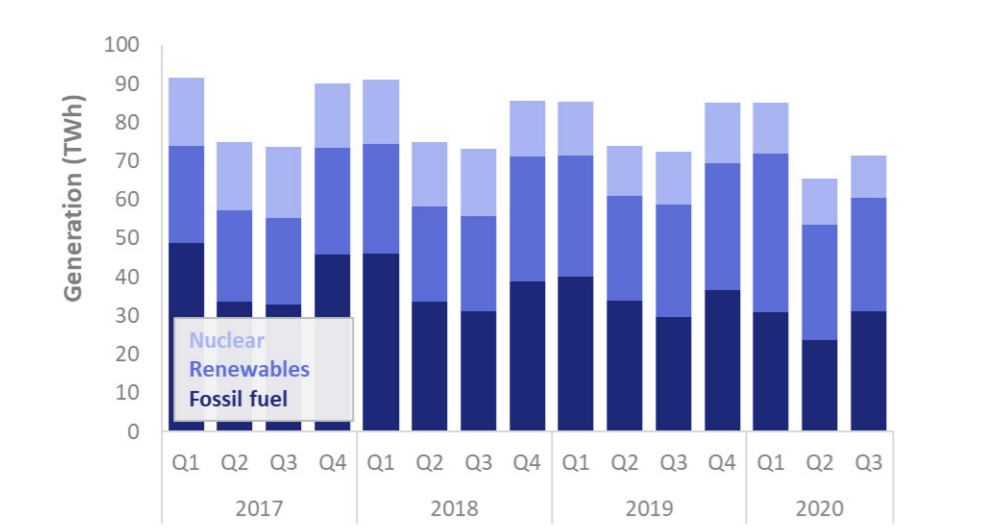 Renewable energy has an important role in the UK today, as shown in the first graph below. However, the use of non-renewables such as nuclear and fossil fuels continues to be the main source of electricity production

This graph shows the production of electricity in the United Kingdom, thanks to renewable energy, from the end of 2019 to the end of 2020.

Although solar is of the most popular energy sources, the graph shows its capacity and profitability is much lower than its counterparts. In contrast, offshore wind is clearly the most cost-effective solution in terms of capacity and efficiency.