Though the United States is known for opulence and many astounding architectural structures, some people are surprised to realize there are castles in the USA as well! 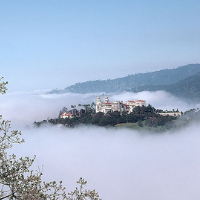 Hearst castle is both a luxurious home and a museum named after 19th century self-made newspaper tycoon, William Randolph Hearst. His father, George Hearst, grew up in rural Missouri and did not receive a formal education, but made his millions in the rich copper mining industry. William Randolph acquired large portions of land and money from his father, including the plot of land upon which Hearst Castle now stands. The architect of this castle, Julia Morgan, created a sensational design that attracts thousands of tourists a year. The courtyards are adorned with Egyptian sculptures, and the mansion’s walls are adorned with several original 16th century tapestries. 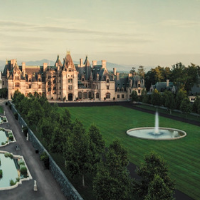 The Vanderbilts were once the wealthiest family in America, with a fortune in excess of $200 million. They uncovered success in the shipping and railroad industries of the early 19th century, and built several extravagant homes which were sadly torn down after their wealth plummeted. But one fantastic reminder of their affluence remains in Asheville, North Carolina—Biltmore Estate, modeled after a French Chateau. It sits on an 8,000 acre estate, and contains within its antique walls 35 bedrooms, 45 bathrooms and 65 fireplaces. The grounds were designed by landscape architect Frederick Law Olmsted, featuring a man-made forest and a rose garden containing 250 varieties of rose. 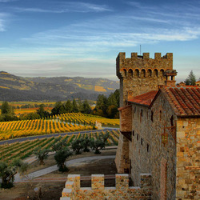 It took fourteen years before this Tuscan castle opened to the residents and tourists of Napa Valley, but ever since then it has become a favorite among wine enthusiasts. This castle hides behind its walls world-class wines and a famously unique setting that has given rise to many wine and cheese tours. The castle is made from a combination of brick, wood and iron to mimic the ancient structures that dot the Italian countryside. Owner Dario Sattui wanted to create as authentic a model of medieval architecture as he could, so he included in his building plans a moat, drawbridge, five towers, stables, an armory, and even a torture chamber. 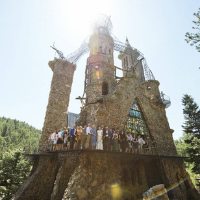 This castle was originally intended to become a small family cabin in the San Isabel National Forest in Southern Colorado. But Jim Bishop, who bought this 2 ½ acre plot of land with $450 dollars, soon found that his small cottage in the mountains would not satisfy his deep yearnings for greatness. So, he decided to build his very own Colorado Castle, and he did most of the construction by himself—hauling rocks from nearby ditches, cutting down trees, and laying foundation 12 feet into the earth! This castle puts Jim Bishop’s tenacity on display, and you can visit it entirely for free.