So you’re looking to go smoke-free? Giving up cigarettes has never been easier than it is today. While many have been burned in the past by nicotine replacements that weren’t especially effective such as patches and that gross gum, electronic cigarette tech has advanced to a point of unmatched reliability, and the success rates speak for themselves!

Vaping has taken off more than anyone could have predicted. While a few years ago you would have drawn odd glances puffing away on your fragile 650mAh device, nowadays electronic-cigarettes have become to go-to method for nicotine reduction and ultimately walking away from one of the hardest everyday-addictions in the world, painlessly and affordably!

Electronic-cigarettes may vary in appearance and function, but they all basically do the same job: a battery pushes power into a ‘coil’, which is a neat little arrangement of cotton and wire. The wire heats up and in turn begins to vaporise the e-liquid which is soaked into the cotton, which you inhale. While the principle couldn’t be simpler, there are so many units on the market offering so many different features that it can get confusing. 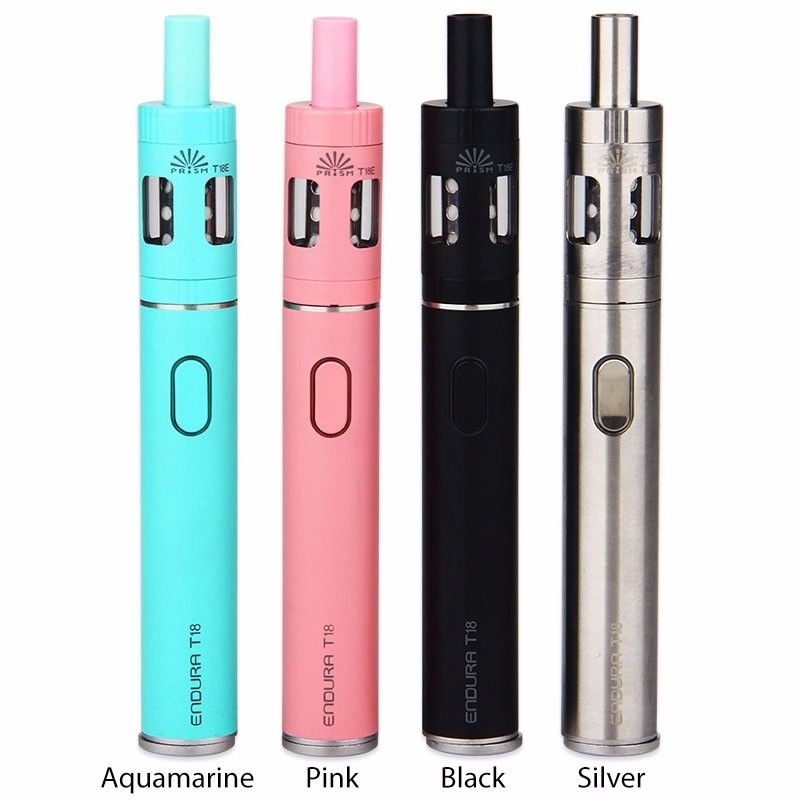 Without question one of the most effective, streamlined devices on the market right now, the Endura T18 and it's European varient, the T18E are extremely popular with people who have made the conscious choice to banish the nicotine demon.

The T18's main strength is in it's simplicity: many e-cigs today come loaded with all kinds of special features. From detailed OLED displays to Temperature Control functions, it can become more than a little confusing and frustrating when your main objective in this pursuit was to just give up smoking! The T18 instead features a single button. Press it three times to switch it on, hold it down to 'fire' the device up, another three clicks to switch it off again! Not smelling like exhaust fumes has never been easier.

The T18 is loaded up with a 1000mAh battery. While it's not the hugest power capacity in the world, it's worth remembering this: the device outputs a consistent 14 watts of power every time you activate it, which is relatively minor compared to some of the more 'beast' devices available. If you remember to keep it in standby between uses, you can get a couple days charge out of it before you need to plug it in. The device also features 'pass-through' technology, which is a fancy way of saying you can still use it while it's charging. Coming packaged with a display stand, this makes it the perfect desktop-vape!

A final point to mention is that the coils which fit the T18 are locked at 1.5ohms. This simply means that it is considered a 'mouth-to-lung' device, used much the same way you inhale a cigarette, and as such won't put out the huge clouds that many people associate with vaping. An effective, affordable and cute social vape! 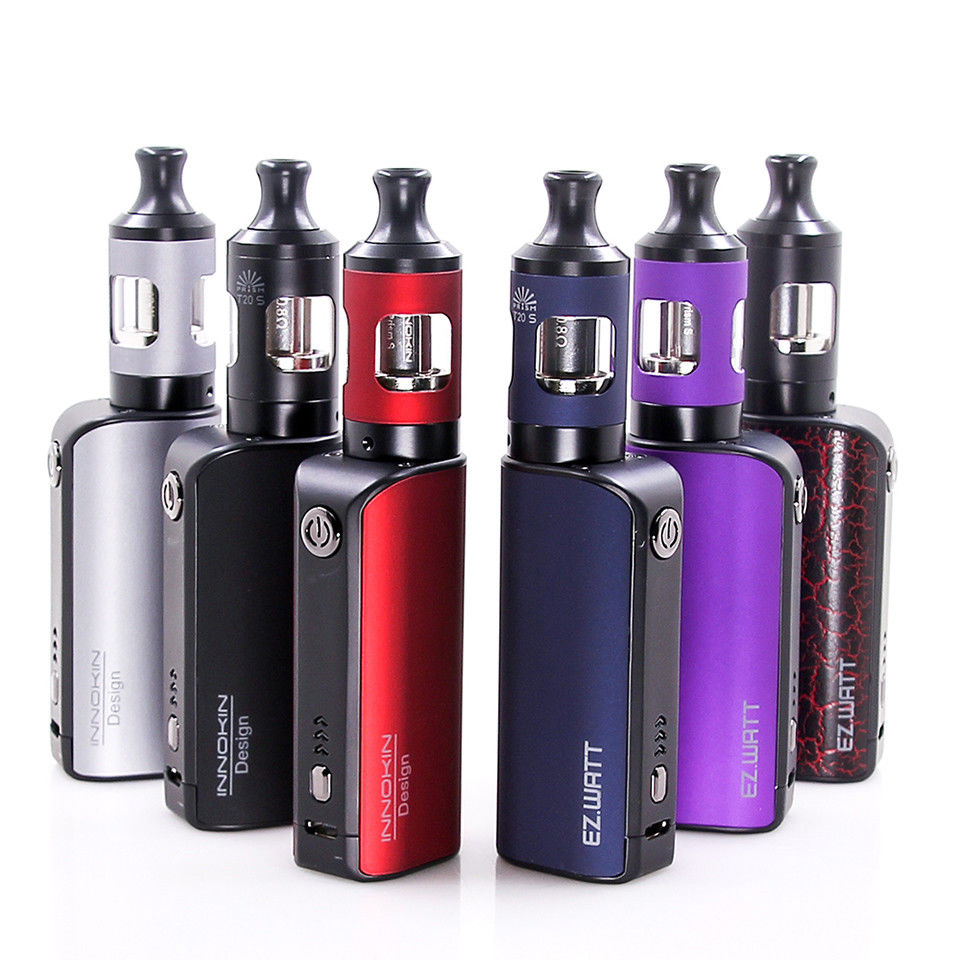 A step-up, now, with another Innokin device. The EZ.WATT offers everything the T18 does, but is able to boast a number of extra features. The battery is of a considerably higher capacity, clocking in at 1500mAh. This not only gives you greater peace of mind as to your battery's lifespan, but also permits you to explore some of the EZ-WATT kit's extra features.

Once again designed for the new vaper, the EZ.WATT features no complex displays or modes of operation. What it CAN do, however, is allow you to increase the power output with the click of a button at the base of the unit. Programmed with six distinct levels of wattage output, the lowest option is a very moderate and undemanding 13 watts, while the higher end of the scale boasts an impressive 35!

The EZ.WATT kit is ideal for the forward thinking vaper: there are two different strengths of coil available for the device, each offering a unique experience. One is a 1.5ohm variant, much like in the T18 we described above. The other is 0.8ohms, and this is a whole new game!

See, when an e-cig's coil registers less than 1.0ohms, it is referred to as a 'sub-ohm' device, with the wire in the coil being of a material that has a low level of electrical resistance. Tech-noise out of the way, this simply means that more power flows through the coil and results in more e-liquid being vaporised, which in turn leads to bigger clouds!

This is a really good device for those who want to experiment with the world of vaping, and with a 35 watts power option you can confidently screw the tank of a friend's exclusively sub-ohming device onto your unit to get a feel for the larger world of vaping. 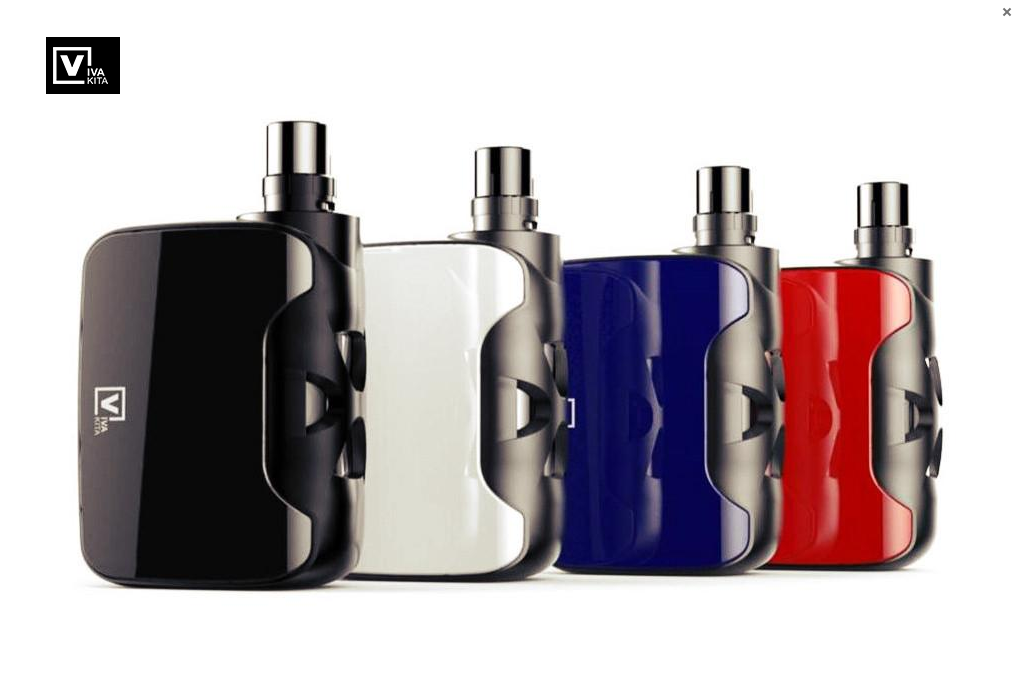 Ever hear the expression, "Don't judge a book by it's cover"? The Viva Kita Fusion is a testament to big things coming in small packages! Beloved by many for it's small size and comfortable grip, the Viva Kita Fusion appeals to many simply due to not looking like a traditional e-cig.

The Fusion, despite it's small stature, boasts an impressive 1500mAh, which is fortunate as it's definitely a more powerful machine than those we've already looked at. Once again featuring only a single button, it has three distinct power outputs: 30W, 40W and an all-powerful 50W option! But don't be afraid of it's thunder, the Fusion comes fitted with seriously impressive 0.2ohm coils. This is extremely low, and while usually I wouldn't recommend such a powerful device to a vaping newbie, the Fusion has one of the smoothest, cough-free inhales of any e-cig I've tried!

Another thing to note about the Viva Kita Fusion is it's internal tank. The number one cause of e-cig breakage is people dropping the unit and the tank's glass smashing. As well as this, a badly constructed tank is likely to result in e-juice leakage and sticky fingers. Viva Kita solved both of these problems by making the tank internal, so you can just take off the lid, pour in your juice and you're ready to go!

Viva Kita are aware that 1500mAh is only so much power for those who want a consistent 50W output, so they've cleverly installed power-protection software which causes your unit to switch itself off after being unused for 10 minutes. This solves a one of the main reasons for electronic-cigarette frustration: no power! 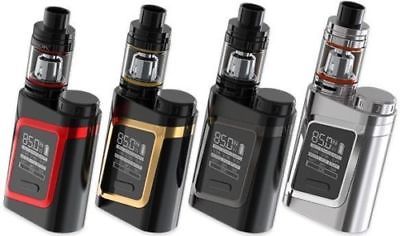 Now we're getting into the serious hardware. SMOK are something of a 'flagship' company; renowned worldwide for their powerful, tech-heavy units and bulky, big-cloud tanks. The AL85 is a strong contender for those who don't quite get the 'hit' they're looking for from traditional mouth-to-lung vaping.

The features SMOK have managed to cram into the AL85 make it a kind of vaporising clown-car. The wattage can be set anywhere between 1-85W and it features Temperature Control technology, meaning you can dictate the limits of heat in your vape experience. It features a puff counter for those who want to watch their intake, a working-temperature readout for those who don't want to put the unit through too much, and has pre-programmed functions for those who want to utilise coils made of different materials, such as NiChrome and Titanium.

And how could I bring up the AL85 without discussing the tank? The TFV8, or 'Baby Beast' as it's affectionate known, provides the biggest clouds you can get without rolling up your sleeves and building the coils yourself (there'll be another list about just that later...)! Featuring a top-fill hatch that requires no awkward unscrewing and juggling of parts while you refill, it's yet another contender for 'best leak-proof device' available!

One thing to note about the AL85 is it's power-source: the unit takes an external 18650 rechargeable battery which slots easily into the top of the device. Once it's in there, you don't need to do anything differently; just plug it in via the included micro-USB and it'll charge away, same as any device. But a removable battery offers a solution to the frustrating situation of running out of power when you're nowhere near a charging station: just whip out the dead one and stick a charged battery in there and you're rolling! 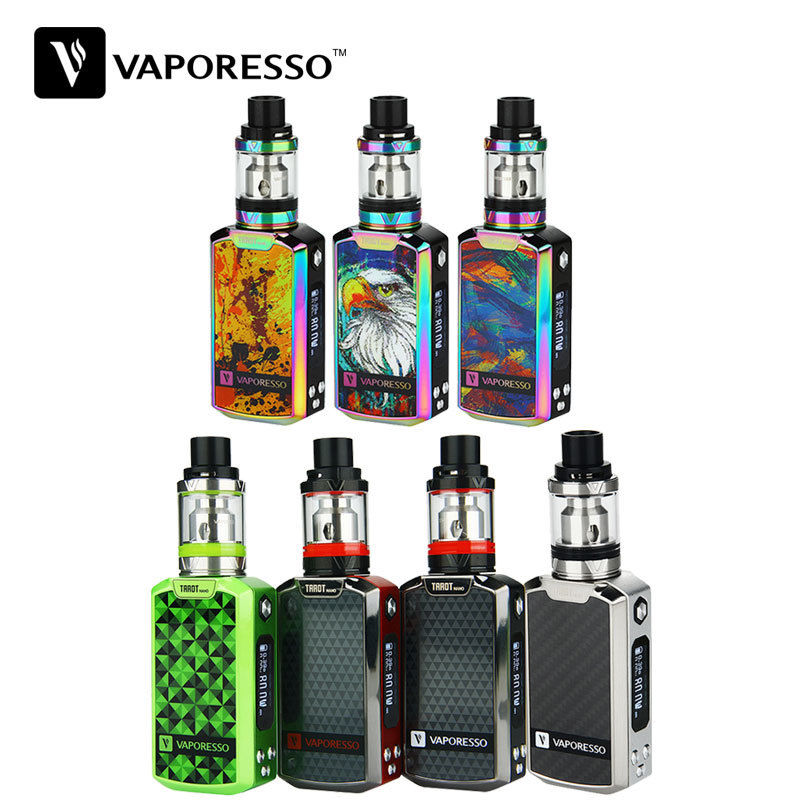 Vaporesso have hit the electronic-cigarette scene in recent years with much style and great confidence, and the Tarot Nano kit helped solidify their new reputation as industry heavyweights. Small and compact, you'd be forgiven for wondering what the Tarot Nano could possibly do for you. Well, the answer is: everything you've already read about e-cigs and more!

The Tarot Nano mod has a jaw-dropping 2500mAh capacity battery; that's a really serious amount of power and it's stunning they managed to fit it into such an ergonomic device. Able to range in wattage from 5 to 80W, it's perfect for the small and satisfying mouth-to-lung hits as well as being able to produce clouds of a magnitude that would make a SMOK fan toss his unit away in disgust!

Features include variable wattage, variable voltage, temperature control, settings for a plethora of different coil materials and a host of other inspiring ideas which come together to make the best renaissance-vape on the market today!

The unit features two 'memory modes', which allow you to save your favourite settings and jump straight to them, as well as a 'bypass' mode which effectively switches off a number of the unit's protection-softwares and let's you go hog-wild, though it must be noted that this mode is best left for those who like to build their own coils.

But on the subject of power protection, Vaporesso has you covered! The Tarot Nano comes with Vaporesso's own Omni-Board, a chipset which keeps a careful eye on your unit and prevents it from overheating or falling into a setting which could be harmful to your tank.

And speaking of the tank: the Tarot Nano comes fitted with the VECO Tank, another Vaporesso innovation. The VECO tank features a revolutionary coil system, referred to as EUC (Eco Universal Coils), which strip back a number of superfluous materials in the coil's construction. This means three things: they're smaller and easier to change, they generally cost less than other sub-ohm coils, and you're throwing less materials into the landfill at the end of the day. Finally, a vape which does good for your lungs AND the environment.